Summers in the '90s were my absolute favorite. Aside from playing on the swings or shooting hoops, countless hours were spent on SNES game time with my siblings and cousins. When Street Fighter II came out, I remember eagerly awaiting my turn to FIGHT. My two favorites to use were: Ryu - because he is a stud, and has the best phrases for his moves, and Blanka - because he has such crazy, animalistic and sub-human moves. I would get so upset that I couldn't hit B-button rapidly enough to generate electricity, and so jealous when my cousins easily shouryuken'd my face.

For the Street Fighter 25th Anniversary Art Tribute, they were only accepting 2D art work, so I crocheted my pieces, and had my terrific side-kick, JSalvador, help photograph the scene with his fancy camera. Coincidentally, over a year ago, when J and I first began our friendship, I saw his amazing Street Fighter series, and immediately sketched out a Ryu, Blanka, E. Honda, and Chun-Li that I proposed to make. At that time, I envisioned a sort of simplicity like my Ninja ornaments, with the function of a keychain. But upon making Ryu, I realized I didn't have much of a solution to provide workable and durable hair, given forethought, of the every day wear and tear if they were to be used naturally, as a keychain. So, I dropped the project. Then a little over two weeks ago, J sent me a link to submit to the anniversary show!

Initially I was just going to do Blanka. I thought his hair and body proportions would be so tricky to create, that I could only finish him before the submission deadline. But his hair was a lot of fun, and actually easier than I imagined to do! For his eyes, I used the brads I had embossed white from my previous Etch-a-sketch project. Spooky! 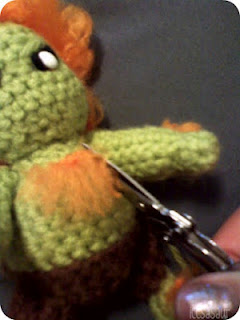 Once I was finishing him up, I realized, what good is he just posed by himself? I decided to make someone else, and create a real fight scene. I didn't have much time to think about how I was going to establish the illusion of electricity if I did Blanka's electric move, or even a Hadouken, so I focused on the one thing I really love: gore. Blanka Head Bite! Yes, I wanted blood.

I installed wiring through both their legs, and Ryu's arms, because I wanted Blanka to be able to crouch, and Ryu to be able to spin kick. But even with the wire, the toughest part I had was creating the perfect pose. Blanka's attack needs to be in ball form, and it took so many angles with him and Ryu to make it... not look, any more perverse than one character biting another character's skull. 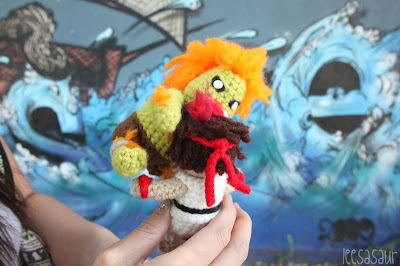 Location scouting was a little trickier than I imagined. We drove through a few alleys on Melrose, and finally, when I saw this rusty chain and old piping, I knew I had found my stage (insert plane sound, announcer: "Los Angeles." I actually believed a homeless man to have defecated nearby because I kept smelling something fecal-y. Then I saw a fly catcher bag, and J informed me that they use poop scent in those. Learn something new every day. 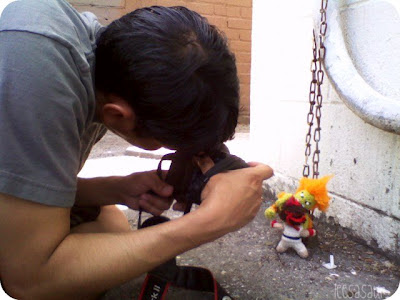 We managed to get the shot, regardless of the stench: 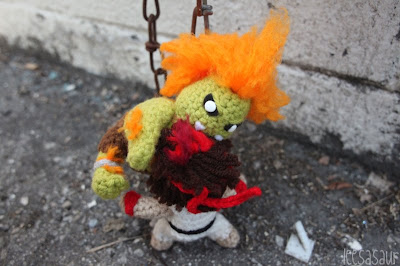 J even had me do a mini photoshoot after. Here's me, in my usual awkward self, and my new baby Blanka: 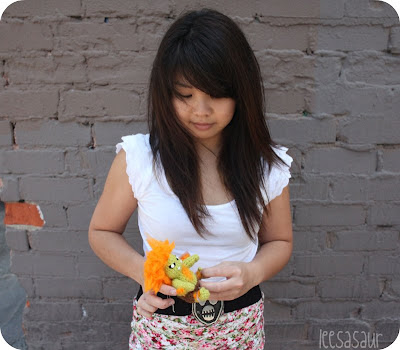 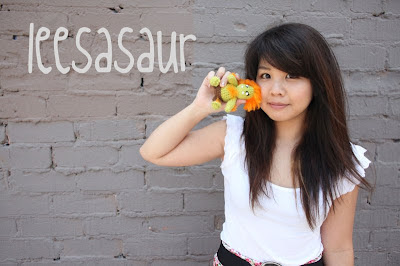 They even came to work with me at Toy Art Gallery and made some Mugstached friends: 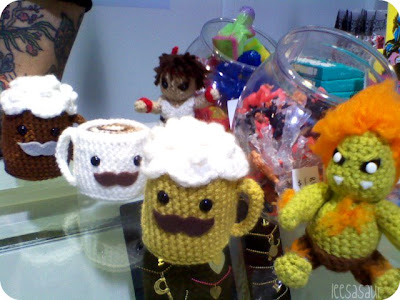 I'll end up doing some individual photos of Blanka and Ryu when I have some time. For now, I am happy to have submitted my piece on time, and hope very much that they pick me! If you're still reading down here, you might as well let me tell you about another fun Street Fighter collision that happened last night! I met this incredible artist, Turbo, who made some songs about Street Fighter from the perspective of Balrog! He even posted this gnarly, Blanka in front of the fire, photo. Definitely listen to his song, Gigaton! I love.