I have always never resisted the opportunity to doodle on an Etch A Sketch whenever I find one in my sight. As a kid I spent many hours making these temporary masterpieces - I even had the mini keychain one so I could sketch on the go. In February I began crocheting mini Etch A Sketches. I tried embroidering many things, fancy hearts for Valentine's Day, the hand gesture for peace (not sure), but really I just needed something simple and eye-catching to put out for initial posting because I knew I would embroider whatever people wanted me to anyway. So I defaulted to what I would personally want, Dinosaurs. I was on a roll and did a few of these, but then I encountered the dilemma of knob making.

I usually use safety eyes for my work, but they don't come in the white color I needed. I investigated my sister's craft room and thought to use eyelets that she would use white powder to emboss. However, not only were the stems of the eyelets shorter than necessary, but when we snapped them down, the pressure was so strong that the embossing came off. Then she suggested I used brads, so I picked up a box, and she embossed those white for me as well since the only ones I could find came in multi-colored pastels. After she had embossed a few, I realized the size was slightly too large so I had to pick up a different size. By this point, my sister had gotten engaged and began wedding planning already for a June ceremony, so she was preoccupied with that. I also started taking on a bunch of projects, as usual, but I always had my 90% completed Etch A Sketches on my to-do list.

Finally after all these months I asked her to teach me how to emboss the brads, and I don't know why I didn't ask sooner. It was quite simple and amazing. I couldn't help but smile when I finally secured the knobs to my pieces. What I love about mine are that, yeah I took away the ability to sketch, but my doodle now won't ever erase! 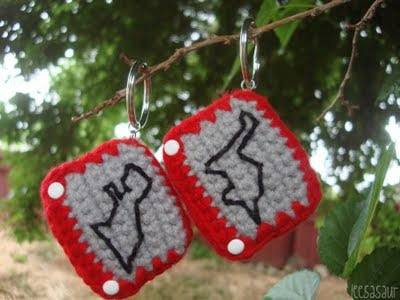 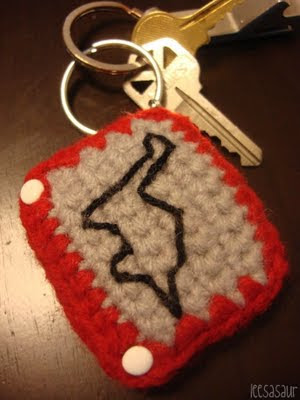 I have only crocheted replicas of characters, so this is my first tribute to an actual childhood toy and I couldn't be more pleased. I'm not sure if kids still play with Etch A Sketches today, but I am still giddy to see them around.
Labels: amigurumi childhood crochet dinosaur draw etch a sketch fun retro sketch toy