Sometime in March I visited a cute Japanese culture inspired shop called, JapanLA. My friend, amazing artist JSalvador, recommended it to me and I just thought it was so adorable. I ended up talking to the sweetest worker there who invited me to their Japan Benefit Art Show they were having in a couple days, and suggested I bring some of my Leesasaur products to show. At the time I was unsure of how long I would be staying in LA due to an unforeseen obstacle, but I managed to stay a while and was glad I attended the show. It was pretty wild in there and I briefly met with the shop owner, Jamie, who took my French Toast and sample business card. To be honest, I didn't think I would get a response from her, but a week later she emailed me asking to be apart of their upcoming Kittens and Ice Cream Show! 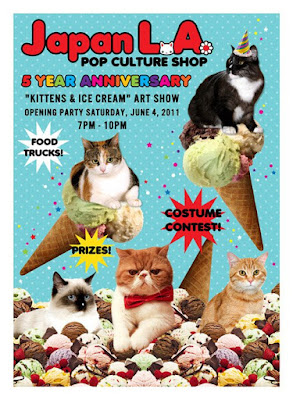 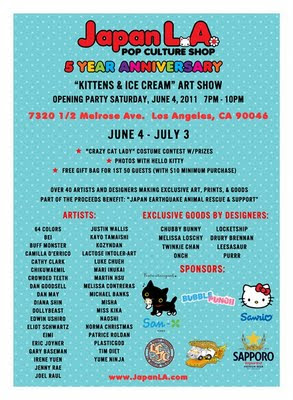 It was so bizarre because I happened to be making my Banana Split piece just then! My mindset was in the ice cream and I didn't really put much thought into implementing a kitty because I wanted to keep things simple and focused. At first I was going to do a bowl of different ice creams. I started with vanilla, green tea and chocolate, and was even going to do mint chocolate chip, but I was so in love with my Banana Split, that I wanted to make a larger scaled one for the show. This is only my second piece that is a set-scene concept, so I spent hours upon hours on not only the individual pieces, but the whole compilation, to make sure everything fit perfectly together, aesthetically and physically (the bowl was really difficult). 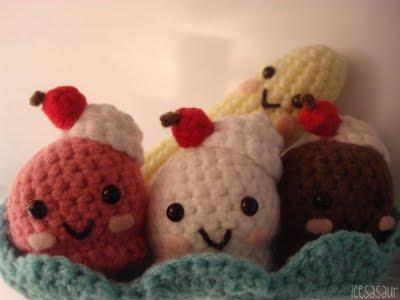 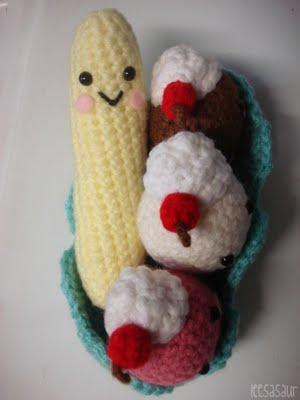 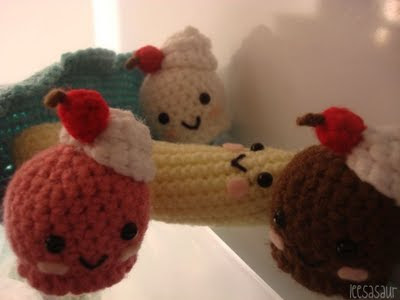 The show also sparked the execution my long awaited Chill Pops, so I thought it'd be great to add them along with my piece since Jamie mentioned she would like me to make my ornaments or whatever else I think of that would be cute in the show. 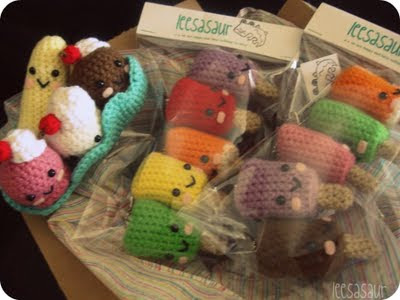 The day I packed and shipped them off, I felt a deep sadness. They are very special to me and I just hope many people will enjoy them as much as I do. This is my first ever art show and I actually won't even be able to attend the awesome opening for it! If you happen to find yourself in Los Angeles and are in the mood for smiles, I hope you can make it to the show or just the shop itself!
Labels: amigurumi art show banana split chill pop. crochet custom ice cream japanla popsicle