Earlier this year, I worked a temporary job for a terrible company, but I was fortunate to have made a friend from it. Although it was bound to happen, I believe, the ice broke between me and my new supervisor, Liz, when we caught the elevator up to the office one morning. We didn't know too much about each other, but she did know that I worked as a crochet artist, so she asked what I had been working on. It had been right after I finished Neville, so I told her I was brainstorming monsters, to which she replied that she just started watching The Walking Dead. My excitement to hear this, slaughtered my early morning lethargy, as I encouraged her to hurry watching so she would be ready for the latter half of the second season.

While I have never read the comics, I am a passionate fan, and have been religiously watching The Walking Dead since its premiere. I adore the cinematography, the human vulnerability and nature, the humor, and of course, the zombie excitement. This past season was especially fun, because my friends and I basically created our own unofficial Facebook forums about the show and its characters. During work, Liz and I would also discuss our feelings about it on a regular basis. One particularly slow day, I used some yarn scraps to work on a little piece for her. It was just the head and ears, and I never got around to finishing his body, but soon, we had both ended up leaving that job. So the unfinished piece sat in my apartment for months, and frankly, I wasn't very bothered by it. 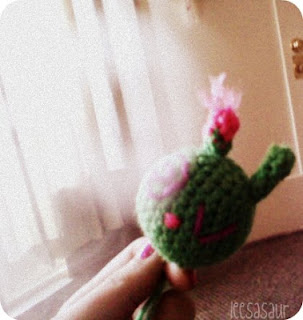 I realized, I really liked it as it was, and that I would enjoy making more, "Zomballs," in different colors. These ones would actually be "Zombuns" because they're all bunnies, but I don't want to limit the design, so Zomballs they are! 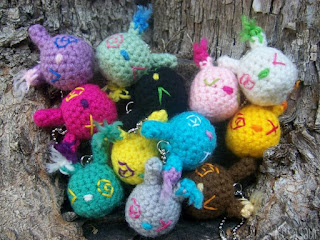 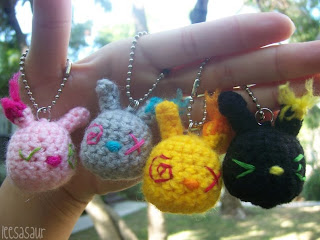 So, with the third season of The Walking Dead coming up this October 14th, I decided to do a giveaway leading up to the premiere! Yes, I'm really excited about it, and whether you're a fan or not of the show, you can still enjoy a baby Zomball of your own! Every week I'll post a question to those who 'like' my Facebook, or follow me on Twitter, and all you'll have to do is respond to be entered! The questions won't pertain to the show, because really, I think it'd be fun to grab some insight about my fans. If you're interested, get ready! 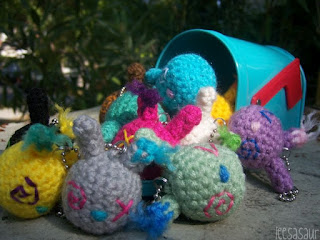 To be valid, you must either like me on Facebook and respond to my posts, and/or follow me on Twitter and tweet me back! All entrees will be put through a random number generator to determine the lucky recipient(s).
Labels: amigurumi bunny crochet giveaway monster zomball zombie