This post and project have been long overdue! I started writing and working on this in October and only now have had time to finish! It's been driving me crazy just looking at it all these past months, and even after recent completion, I really wanted to debut it with a stop-motion video first. So, without further delay....

I have been wanting to make monsters and more dinosaurs for a while now, but I knew my mindset wasn't ready for such a task just yet. Having been busy with custom projects and orders, the timing to explore into this kind of realm has been nearly impossible -- Enter the wonderful mind and website of Matthew Gray Gubler.
It's true, I have been on a binge of Criminal Mind episodes, and I'm not ashamed. I grew up on Freddy Kruger, the Cryptkeeper, Scary Stories, and everything horror and gore you can think of. The excitement, the entertainment, the imagination, are all attractions I cannot deny. I felt all these things when I delved in MGG's watercolor. I knew when I saw the painting of "Neville brushing his teeth" that I had to create him. I couldn't get the image out of my head. 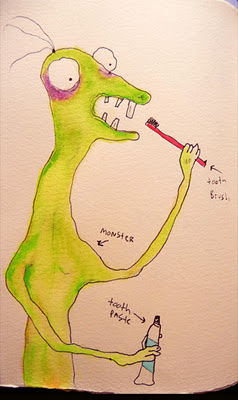 Because his painting doesn't display the bottom half, I had to piece together from his other paintings, and envision the lower section of Neville. In order to keep his arms and legs flimsy, but posable, I jointed them with wires. Wiring is a tricky technique but I have grown very fond of it ever since I used some to make a launching-capable Kernel-Pult. There is still a lot I have to work on, but I plan to use more in the future. I got really excited about making the toothbrush and the toothpaste. I've always been fascinated with miniatures but rarely put in the effort to accessorize my amigurumi with props, so this project made me realize I should really take the time to do it. 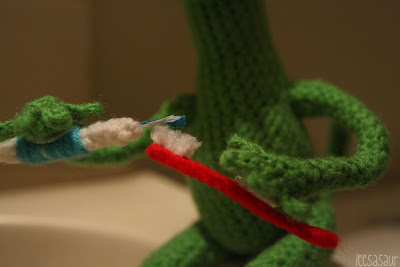 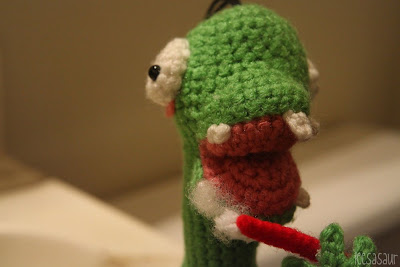 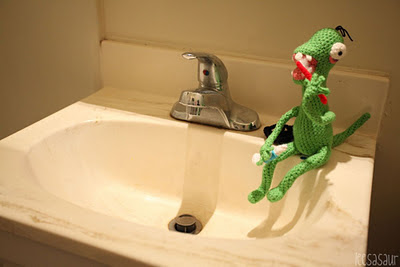 So, I wanted to do a little film with Neville utilizing his brushing utensils. It was supposed to be a few seconds long, but it ended up turning into a minute. It is my first ever animation, and I am very happy to have had JSalvador work on it with me. We even wrote up a nice quirky introduction before we even knew what we were doing: 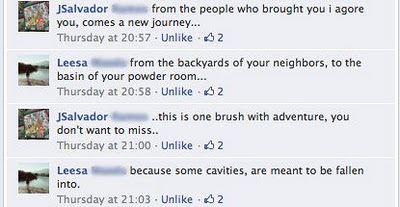 After our first promo film together, I Agore You, J made the wise decision of being more organized, so we travelled into storyboarding: 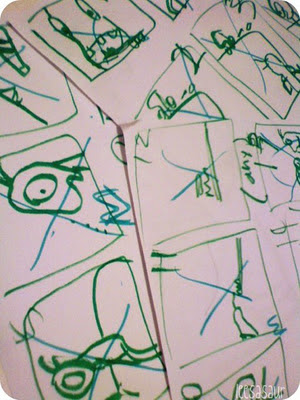 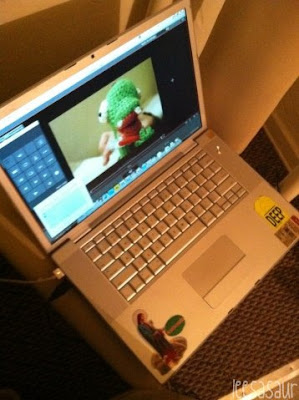 After hours of shooting in a tiny bathroom, copious amounts of toothbrushing, laughter, and determination, I present to you, "Neville brushing his teeth" --
I knew I wanted to have him putting on the toothpaste then brushing his teeth, while doing the sound effects, but I didn't think too much about the background ambiance. It just so happened that yesterday I sang the song "Dream a Little Dream of Me" for the first time, and decided to record it. It was then that I realized the song could creepily work for the film. So, that's the explanation for the bizarre and awkward film that I hope you enjoyed. I'm so happy that I came across Matthew Gray Gubler's art. If he inspired me this much, I can only imagine the good he can do for so many out there. I love Inspiration Seesaws!
Labels: animation custom matthew gray gubler monsters toothbrush