Hit That B Button

Last Sunday, I completed my crocheted Blanka and Ryu pieces for the Street Fighter 25th Anniversary Art Tribute Series, and submitted my photo. Imagine the excitement that overcame me on Friday, when I received a lovely midnight surprise email:


"Now, while we will be sharing artwork that we received throughout the year in our community channels, we wanted to let you know specifically that we feel like your submission would be an excellent piece to include in a limited 64-page art tribute book that we’d like to create to celebrate the 25th Anniversary. Congratulations! Considering the massive number of submissions we received, and the quality of them, it was no small feat to stand out."

They asked that I submit any other photos I had of my pieces, and immediately I knew I just HAD to do my Blanka electricity shot. However, I was still clueless of how to make that shot work. Since my pieces are three dimensional, and can't be shared with everyone physically, I wanted to limit potential usage of any editing programs, in order to best capture them in their raw form. I thought, Glow sticks? Lighting tricks? It turned out my brightest idea was to pitch the dilemma to my super friend, Josh, drummer of the amazing band 1,2,3, to which he responded, "sparklers." And so, the task had a light! 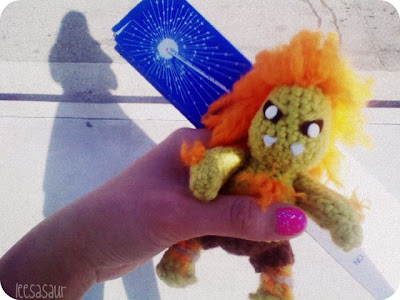 It was time for another Leesasaur and JSalamander adventure as we set off into Chinatown. We found a lovely stage for Blanka, amidst some courtyard shrubbery. It was under a Metro line, so it was really windy and difficult to ignite the sparklers. We used a whole box of sparklers, but we couldn't generate enough sparks in just one shot. Upon going through the film, J, being the clever graphic artist he is, told me he could layer the various sparks from all our shots, onto the one shot I wanted. 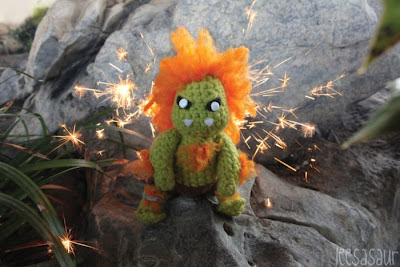 This is THE shot. Thank you to the Street Fighter 25th Anniversary Team, JSalvador, and Josh, for pushing this to happen. I am so happy and pleased that this exists.
Labels: amigurumi anniversary blanka capcom crochet street fighter