Cartoon nostalgia is rough. They say they don't make cartoons like they used to, but all cynicism and stubbornness aside, there are some brilliant cartoons on current TV. Take the dynamic bromance of The Angry Beavers, chilled with the attitude of Teenage Mutant Ninja Turtles, glazed with the bizarreness of Adventure Time, served in a Sega Master System cartridge, and you get, Regular Show!

The show focuses on slacker BFFs, Mordecai (a Blue Jay) and Rigby (a raccoon), who work as groundskeepers for a park. While I identify most with Mordecai, I adore the silly and naive Pops, who is the son of the park's owner. His giggles, his phrases, his lollipop currency, there are just so many reasons why he's my favorite. I think everything he does is adorable.

Last July, I crocheted 85% of Pops, but I love him so much that I wanted to make a hug-sized version, so I ceased working on the piece. I had every intention of finishing him. I even bought props to go along with his photoshoot. But then I got caught up with other projects, and then the holidays came around, and all the while, Franken-Pops was just hanging around looking miserable: 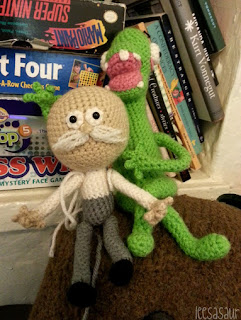 Even though I wanted him to be bigger, today, I got tired of looking at his sad face, so I finished him! 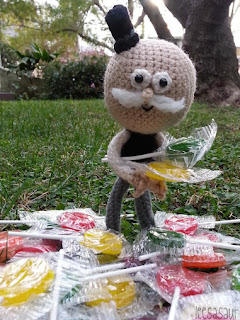 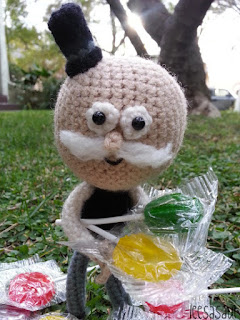 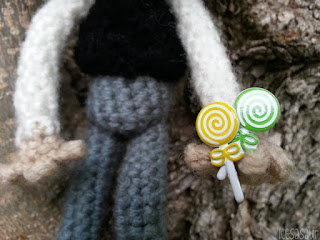 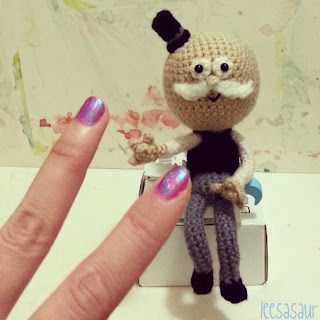 Honestly, after finally completing him, I wish I had just done it earlier. I don't know when I'll get another break to make something I really want to make, so I'm incredibly happy I took the time to have my Pops!
Labels: amigurumi benson cartoon network crochet mordecai pops regular show rigby skips