As a pet, Pluto is pretty low maintenance, but most people are shocked by his personality and habits. It was discovered that when a vibrant object such as a painted nail or a sticker is placed in front of him, he begins an intense stare then proceeds to raise his arms up and flair his fingers rapidly at the object.


I brought this behavior up to my friend who had a turtle for a while, and she said hers did the same thing! She later informed me that it is actually part of a mating ritual. While I love Pluto, and am devoted to him, I am not about to get another turtle. But I do from time to time put a triceratops finger puppet up to him, and now, two little relax bears I got from the awesome JapanLA shop. 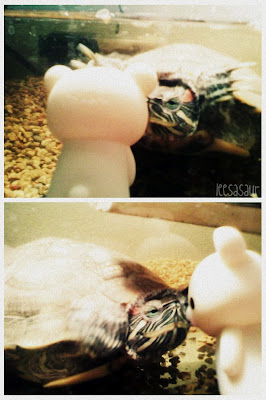 It may be a love-hate relationship, but at least I am keeping him stimulated. Plus it is pretty cute.
Labels: kawaii turtle