After two requests on my facebook to crochet Link, I finally decided to do it. I was reluctant at first because I don't usually make human forms, but I also didn't want to pass up at least trying. At first I was just going to make him only, but after finishing, I realized he didn't make sense without his sword and shield! I personally only ever played A Link to the Past on Super Nintendo but that is all well enough to make me fall in love with the Legend of Zelda. In fact, when the emulator version on my laptop wasn't doing it for me in college, I had to bring up the SNES the next time I went home, which was one of my best decisions. Regardless, the second person who dished me the request sent me a photo of a Link doll from the Phantom Hourglass version. I quickly noticed that the Wind Waker version was similar because they both use the "Toon Link" character, so this gave me a variety of images to work from. 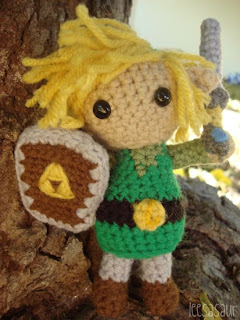 In the end, I came out with a simplified, yet elaborate, Link, that I am very proud of.

I actually had this post created on November 11th at 11am, but got distracted because while I was writing it, I checked my shop and the hits were coming in nonstop. Usually when I post an item I get around 50 views after a couple days, but every time I refreshed this listing, there were 10-25 more views. Here's a documentation via tweets:

For the fact that there were no "hearts" I ruled out that these people were from etsy, so I figured they had to be from some geeky community. Instinctively, I checked reddit searching "zelda" because I thought "link" wouldn't work. When I didn't come across my etsy listing there, I went onto an etsy chat room and asked other members if something could be wrong. The only person who listened wrote me, "congratulations, YOU HAVE A WINNER!" I didn't believe her, so I instead gave up and decided to take a nap before I had to leave for work. When I awoke, my friends on my facebook commented:

I managed to check the listing right before it sold, and the total views were:

Pretty unbelievable. I generated five sales of my other shop items (all of which I had only partially completed) after Link sold out that day and six requests to make more Links. I made 23 sales this month and that's only because I don't have enough time to finish everyone's requests yet. I write now because after that and my holiday rush, I have finally caught a breather. I'm glad I was able to create something that became high in demand, but making the same thing over and over again is torturous.
Labels: amigurumi crochet custom hyrule legend of zelda link link to the past nintendo ocarina of time phantom hourglass toon link triforce video games wind waker zelda