My outlook on pumpkin carving has completely changed since I was a child. Growing up, when we would have a family pumpkin to carve, we'd use a regular knife and make generic jack-o-lantern faces. Sometimes my mom would buy us mini pumpkins and we'd draw with permanent markers on them, and sometimes I even carved mine. When I moved to Washington for college, pumpkins there were cheap and abundant! I bought one and my friend and I carved it with a kitchen knife together. While we were carving, he kept telling me how difficult it was and that we should have gotten a kit. I had no idea what he was talking about because this technique was the only one I knew of! The next year I bought a pumpkin kit with pattern paper and everything. Boy, did that open a world of wonders! I couldn't believe HOW EASY it was and all the different variations you could do. I realized intricate pumpkins I had seen before, were not even that difficult to do with the right tools, and now I had those tools!

This Halloween I wanted to test my creativity as well as introduce my sister to carving with real tools. She was just as amazed as I was! We decided to make our favorite MarioKart characters: 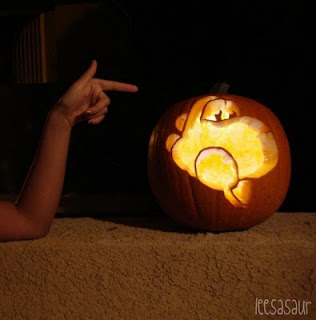 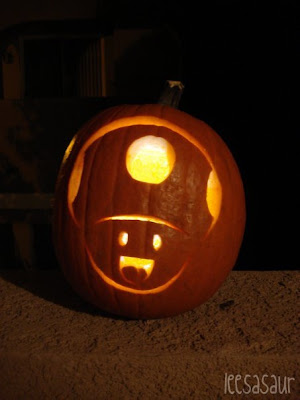 These were our first tries at pattern making and I think we did pretty well! Sadly my yoshi didn't even last a full day in the heat! He shriveled and began to mold within the coming days. My friend told me the key is to coat the pumpkin with Vaseline, so I will have to remember that come next Halloween!
Labels: carve carving halloween nintendo pumpkins super mario toad video games yoshi