A Monster of a Task

Fellow twigga @john_swaggerdap came to me with the task to create characters Sulley and Mike from Pixar's Monster's Inc for him before Christmas. I really wanted to help him out and the characters were bold and alluring enough for me to want to try. I told him to give me two days. At first I thought the worst of my problems was painting Sully's nose the precise color with cheap acrylic paint, but around the end of day two I started worrying because I hadn't realized how detailed he was! I finally finished him the next day: 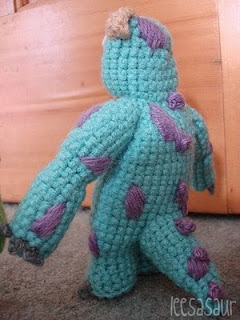 But my task wasn't over yet! I hadn't even begun on Mike. Lucky for me he is less than half the size of Sulley, but even he proved a challenge with his skinny little legs! I ended up inserting wires to hold him up and hoping these dolls weren't going to children. It took me three days, but the result was quite awesome: 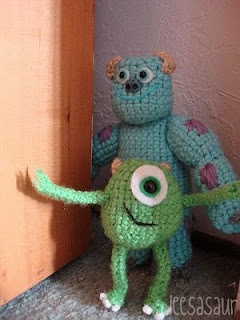 I really want to thank John for pitching these guys to me and supporting my creations. I had only seen the movie once, so I would have never thought to make them.
Labels: amigurumi crochet custom mike wazowski monsters monsters inc pixar sulley