It is really not easy being a crafter in a house full of dogs. The constant fur has been one problem, but now I have a 12 pound problem even harder to fight off: Puppy. At first it was kindof cute when she would steal my dolls that were as big as her head, because she would carry them lightly like a little girl with her doll, parading around the room. It was even funny to find one laying somewhere random from where I placed it. However, soon, because I wasn't scolding her for doing it, it started to become an annoyance. She started stealing my dolls more frequently and I began to worry what might happen to them if left out long enough fending for themselves. Then, trouble increased when I started crocheting her things to play with instead of my dolls. She then felt like she was invited to anything yarn-formed: 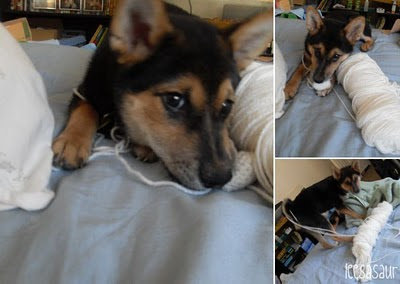 Luckily I was only at the beginning of this project, so I just let her have it for herself. It was however, her last big hurrah because I don't let her get near my projects anymore. Now, the little terrorizer is back to squeaky toys (and anything else she decides to thieve)! 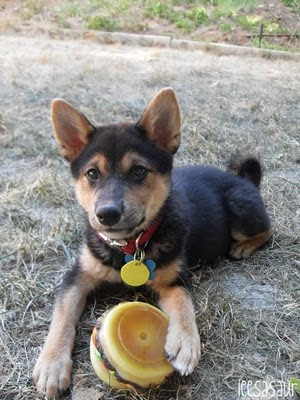 Although, this photo looks more like an evil plot to steal again is in her head! "Till next time!"