Through the magical workings of twitter, I was able to meet an amazing couple, @Eshcii and @CALiz3. Contrary to unfortunate internet-to-real-life experiences I've had in the past, the experience of first meeting these two was pretty awesome. We met at the San Diego Zoo Wild Animal Park and I had a great time: 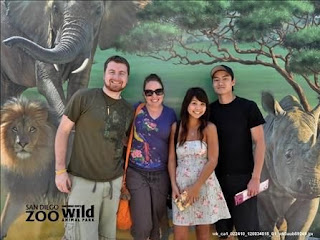 The thing about twitter, for those who genuinely use it, is that it's unfiltered, so a lot of real thought goes into it. People I tweet to on twitter know more about my life than probably all the "friends" I have on facebook (that is, if they choose to read my tweets!). So I guess it's kindof hard to not be who you are on twitter, or at least easy to see who's not who they are on twitter. That being said, I'm glad they both turned out to be real, genuine people. I was also very glad to hear of their engagement earlier this year, so glad that I wanted to make something for them. Liz had expressed her interest in Star Wars previously, and I had just enough yarn to make two mini ewoks. I thought, why not have an ewok matrimony, and that's exactly what I did: 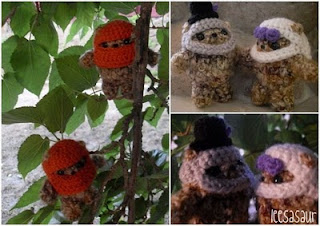 The great thing about these ewoks, other than the obvious cute factor, is that their hoods are removable so you can interchange their looks! Happy engagement!
Labels: amigurumi bride crochet custom ewoks groom jedi marriage star wars wicket