I'm really not a sports fan. I played many seasons of basketball, soccer, and volleyball, growing up, but watching sports was never my thing. Although recently, soccer has become something I actually enjoy watching. My ex was a fanatic but would only talk about it to me, never having me watch games with him. Then I started dating someone else and coincidentally, he was a big soccer fanatic as well! One day we watched an FC Barcelona game and I immediately fell in love. The fluidity of the team, the magic that is Lionel Messi (who I established as my favorite player), and the overall entertainment of the way they play the game, captured me completely. 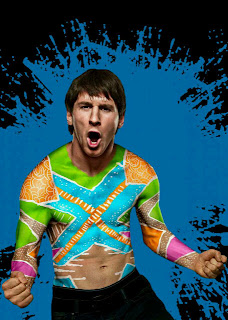 Just in time for the world cup 2010, I was ready to root for Argentina. Not only do they have players from FC Barcelona, but their overall cheerful and humble team attitude won them my dedication. I don't have a car, but I purchased a Jack in the Box antenna ball so I could put the Argentina sticker on and root: 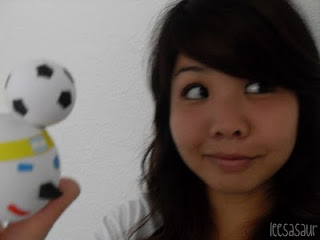 My friend, James, from high school has actually been living in Argentina for the past year and a half, so we had fun cheering and praising together. I wanted to make dolls in support of the quarter-final Argentina vs Germany match. He told me he wanted a lion, and I decided I wanted a turtle, so I created them and adorned them in Argentina colors: 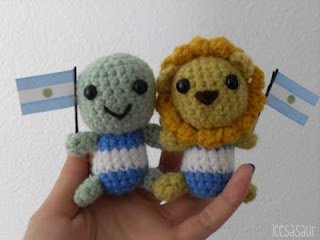 I really wish I could have seen the same magic they used to defeat Greece, South Korea, and Mexico, but their defense was penetrated by the Germans. Logically, Germany has an unfair advantage for having all their players from the same league, so they ultimately train together all year round! Not to mention, poor Messi didn't even get one world cup goal because he constantly had four+ defenders on him in every match. Not even my supporting amigurumi could do justice for my #10: 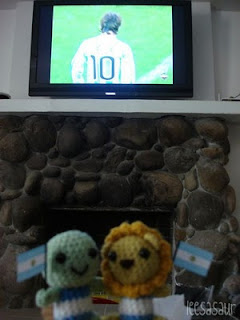 So this world cup was all very upsetting to watch, but at least Spain, who also has many FC Barcelona players, won. And even sadder news on a personal level, the little lion didn't make it to my friend in Argentina! Not sure what happened!
Labels: amigurumi argentina barcelona crochet custom fc barcelona football lion lionel messi messi soccer turtle world cup