I received requests to crochet Toadstool and a 1up mushroom from two coworkers. I was a little reluctant to do Toad because it was to be done in a key chain size. I think the initial pattern and feel for it was what worried me, especially for something that tiny. Later, the trickiest part was creating the vest (which is removable), and after that, everything fell into place: 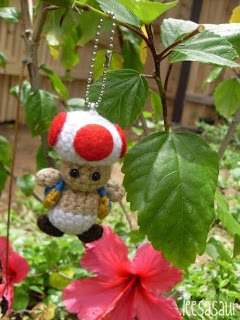 The 1up mushroom proved to be so quick and fun that I ended up doing a power-up mushroom immediately after. I decided to feature them on my sister's Australian Shepard: 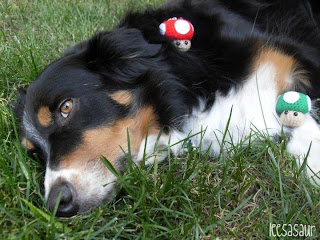 I guess this is what happens when you digest too many shrooms!
Labels: amigurumi crochet custom cute keychain mushroom nintendo super mario toad video games