Some time ago, I had a former coworker ask me to make him a Bomb-omb amigurumi, and I appreciated the challenge. After completing Bomb-omb, I soon after made a Goomba amigurumi, both became popular items. Now, earlier this year, I had a buyer who wanted me to make him "teddy bear" sized Bomb-omb and Goomba for his three year old son. I told him I was going on vacation for a while and that even still, I didn't know if I could complete such a task, but I'd let him know if I finished. Well, after slacking off for a few months, I slowly finished both dolls: 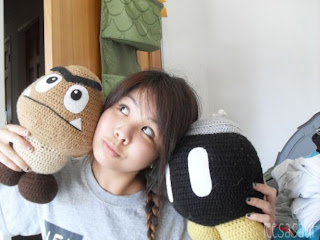 I even indulged in a little photo shoot with my Yoshi costume: 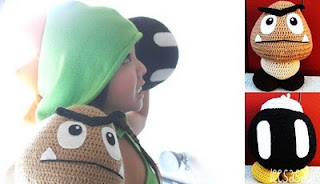 I suppose the right thing to do now is to contact the guy and mail them to him, but I have no idea how I'm going to do that without it costing so much. They don't weigh much, but the dimensions and material don't make them easy to ship! So... I just never contacted the guy back and now I have two huge Bomb-omb and Goomba dolls. I'm sorry, guy!
Labels: amigurumi bomb bombomb crochet custom enemies goomba nintendo super mario video games